Row filters and column lists can reduce the amount of data sent by the publisher and processed by the subscriber, thus reducing network consumption and CPU overhead.

These two new features not only meet the functional needs for users, but also have an impact on performance of logical replication. When using filters, the data is filtered before transmission, which brings some overhead. On the other hand, less data is sent, which saves bandwidth and time spent on data transfer. Also, subscribers spend less time replaying transactions.

Let's see their overall impact on performance with some tests.

> Introduction to the performance test

Introduction to the performance test

I used the following two methods to test different aspects:

The first method is closer to real-world scenarios. The second method receives changes in the logical replication slot, which redirects the changes in the specified publication to a file; this will not be affected by anything other than decoding, filtering, and data transfer.

For each of the test methods, I followed the steps below:

The following are the GUC parameters specified in the performance test to prevent interference from other factors.

Two machines were used in the test – one as the publisher and the other as the subscriber (by creating a subscription or using pg_recvlogical). The two machines were in the intranet, and their hardware specs were as follows:

The network bandwidth between the two machines was about 20.0 Gbits/sec.

The table structure in the test was as follows:

For row filter, I filtered data of different proportions according to the value of the kind column. Due to a limitation of the row filter feature, I set the replica identity columns to id and kind.

In the test for column list, only 4 columns were copied - id, kind, key, and time.

Having described the setup used for the tests, let's have a look at the results.

First, I compared the time it took for initial synchronization with different ratios of rows filtered, and without filter. We can see that the proportion of filtered data is basically equal to the proportion of time. 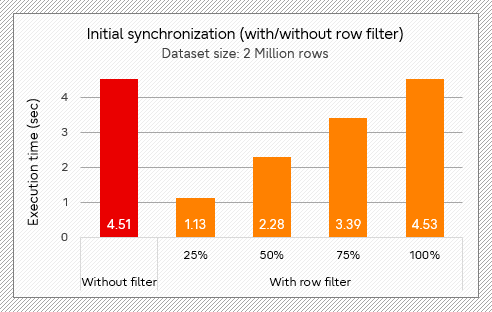 The following two figures are the test results of incremental logical replication. In bulk insert scenario (test 2 below), when a quarter of the data is sent after filtering, the time is reduced by approximately 33% compared with no filter. When executing transactions of a small number of updates (test 3 below), there is also a significant improvement in tps, which is about 70% higher when three-quarters of the data is filtered. 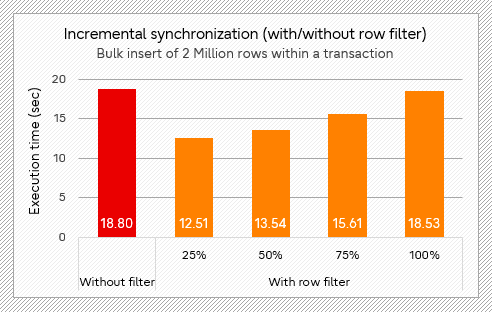 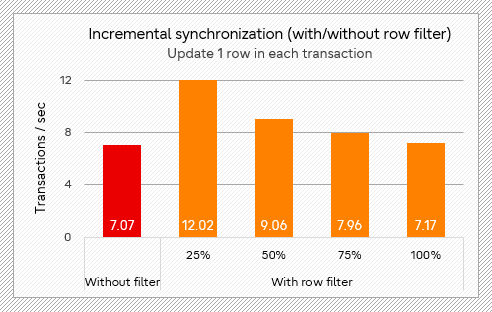 Below are the results using pg_recvlogical. When a quarter of the data is sent, in bulk insert scenario (test 4 below), the time is reduced by about 43% compared with no filter, and in the scenario with transactions of a small number of updates (test 5 below), it is reduced by about 59%. The improvement is more pronounced in the latter scenario. 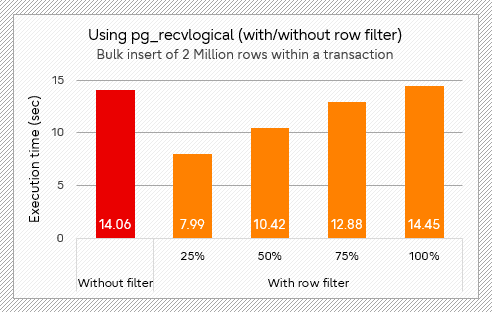 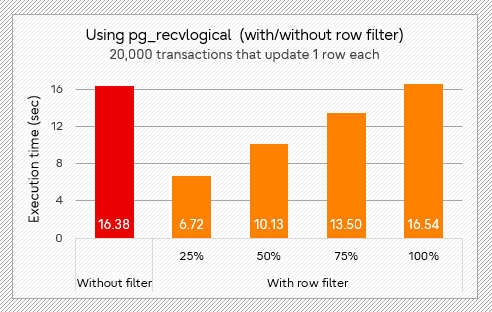 In conclusion, initial synchronization, bulk insert, and a small number of updates can all be significantly improved by using the row filter. Even when the filter does not reduce the data sent, the degradation is not noticeable (less than 3%).

In the initial synchronization scenario, as shown in the figure below, using the column list reduces the time by about 11% compared with no filter. 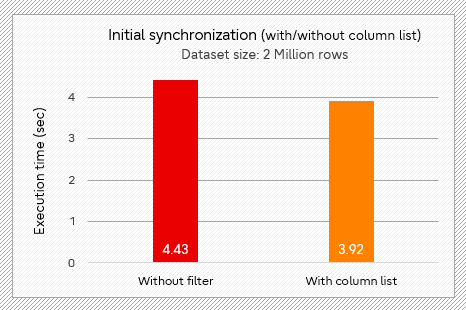 In the test of incremental replication, using column list saves about 14% of the time in the scenario of bulk insert (test 2 below). When transactions with a small number of updates are executed, the tps is increased by 2.5% (test 3 below), and the improvement is not obvious in this case. 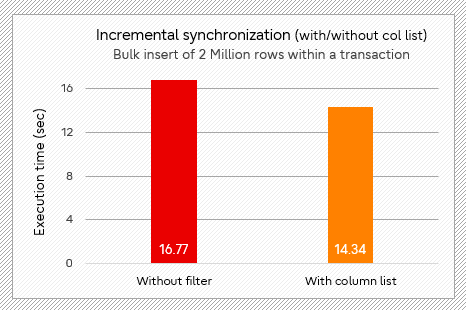 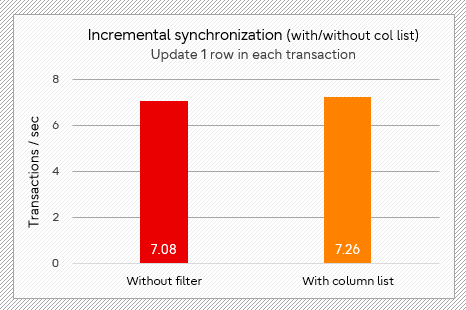 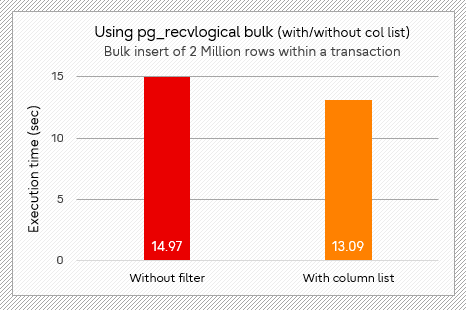 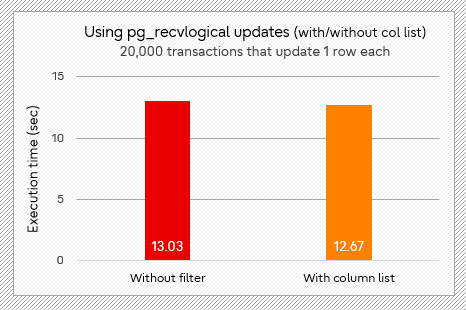 Overall, the use of column filters improves performance for initial table replications and bulk inserts, but for transactions in which a small number of updates are executed, the performance improvement is not obvious. But if the width of the filtered column is larger (for example, columns to store photos or article content), the improvement may be more obvious.

From the above test results, we can see some performance improvements brought by row filter and column list in logical replication. By using these 2 features, we can reduce the amount of data sent by the publisher and processed by the subscriber, thus reducing network consumption and CPU overhead. At the same time, it also saves disk space on the subscriber side. If users just need a subset of rows or columns of a table, they can consider using filters to improve performance.