Open banking is already a reality in many countries, bringing innovation for customers and opportunities for banks and financial institutions. 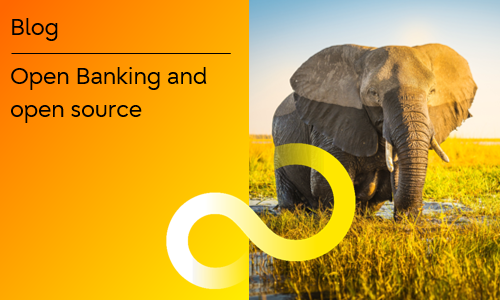 It gives customers the convenience to manage their finances using a variety of third-party tools that can cater to their specific needs 24/7, while giving financial institutions the opportunity to monetise their data via the creation of new products and services to access to new markets.

Open Banking is marching forward - is your organisation ready?

At the core of the Open Banking model is the tenet that customers own their data, and not the institutions entrusted with it, and that it should be accessible to customers via third-party platforms providing competitive products and services to their benefit.

Around the world, this view has been gaining tremendous traction, and is being championed both by customers as a data ownership issue, as well as by forward-thinking banks and fintechs as a tectonic shift in new business opportunities.

The roadmap and timeline to such a significant change involving so many organisations differ from country to country and region to region, with the guidance of regulatory agencies and advisory boards in different capacities (more on that later).

Whether you are a big financial organisation or a nimble fintech, there's something for you

As a regulation compliance exercise or to embrace new technology, the way your organisation handles customer data is being radically transformed as a result of regulations such as the General Data Protection Regulation (GDPR) and Revised Payment Services Directive (PSD2) in Europe and the Consumer Data Right (CDR) in Australia.

Traditional banks accustomed to operate in the traditional model will have to quickly adapt their businesses to this new reality if they want to survive. One of the advantages they have on the other hand, is their experience in analysing customer needs and behaviour in order to create products and services. Their existing tools and processes can be leveraged to kick-start their transformation and position themselves as Account Information Service Providers (AISP) and Payment Initiation Service Providers (PISP).

This strategy has been demonstrably successful in creating new revenue channels in other industries, and is waiting to also be embraced by the banking sector. 50% of Salesforce.com’s revenue is generated from APIs which are used to create apps available via its marketplace, and a staggering 90% of travel fare aggregator Expedia.com’s revenue comes from the use of APIs*. 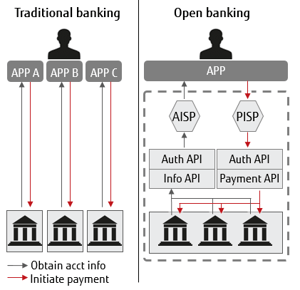 Traditional banking has been restrictive both for consumers and banks. Customers can interact with only one institution at a time,which makes the management of their finances a cumbersome and inefficient exercise. Banks on the other side, have a too limited view of their customers’ finances, which impacts their ability to understand their behaviours and financial lives and consequently offers the most appropriate products and services.

Banks and other types of financial institutions may initially balk at the idea of open source solutions, given the high degree of control and security required by their business in order to protect their customer data. But in fact, an open source development framework results in robust and hardened applications.

Open Banking around the world 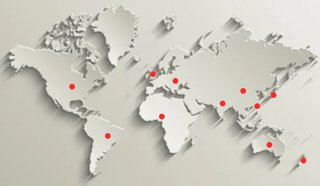 Australia: Planned rollout on mid-2019; government plans phased adoption per sector, starting with banking, followed by energy and telecommunications; regulated by Australian Treasury and the Competition and Consumer Commission.

New Zealand: Payments NZ is coordinating trials of software that enables providers to make retail payments on behalf of their customers; Payments Direction initiative, which aims to develop a common API framework.

Hong Kong: The Hong Kong Monetary Authority launched the Open API Framework for the banking sector in mid-2018; as at February 2019, 50% of bank customers participate in open banking platforms, with another 27% planning to also do so.

China: Under fast implementation; customers have been quick to adopt the concept, despite lack of regulatory oversight.

UK: Available since January 2018; almost 100 enrolled providers (as at February 2019); regulated by the Financial Conduct Authority and the Competition & Markets Authority.

US: The Electronic Payments Association (NACHA) created frameworks for open banking; no regulations in effect or being discussed on open banking; some banks are developing open partner APIs.

Brazil: There is no regulatory requirement at the moment, but banks are already testing the technology with third-party developers.

Nigeria: Banks and fintechs are working with the Central Bank to develop the framework for Open Banking; in the meantime, key players have created Open Bank Nigeria to build a common standard for the sector.

If you’d like to hear how you could be driving greater value from your technology infrastructure through Fujitsu’s Enterprise PostgreSQL, feel free to get in touch on +612 9452 9191.