Open source database technology can help a DevOps approach deliver apps and software faster than ever before. Here's why. 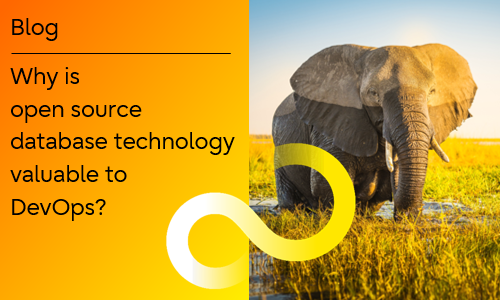 The DevOps approach to development is proving popular for organisations looking to speed up their app and software delivery by reducing overall wait times in the application delivery pipeline. This includes a reduction in the failure rate of new releases, shortened time between fixes, and faster mean time to recovery. It's most successful when also reducing design complexity and enabling continuous feedback from users. All of this becomes even more viable when using open source based database technology.

By nature, open source is collaborative and transparent. It means developers experienced in open source technology tend to have an easier time when adopting DevOps practices. Conversely, traditional IT teams that are more used to working with 'command and control' proprietary systems often find the adoption of DevOps a little more jolting.

Regarding the tools themselves, open source is more modular than proprietary software and as such lends itself to a DevOps approach with a more diverse range of solutions. Open source platforms are designed to integrate with other software components, enabling development teams to remove the complexity of development for closed proprietary software, and providing the best available tools for each particular challenge.

Drill into the actual code of every tool

It’s an essential principle for everyone within a DevOps team to be able to view and understand the state of application development. Open source enables developers to drill into the actual code of every tool, providing maximum visibility for better development. This isn’t 100% possible with proprietary tools, which creates guesswork – which in turn can create sizeable problems.

Many developers have cut their development teeth with open source tools early in their career. So when you’re searching for the best available development talent, using open source tools can be a great way to find a star developer without the associated cost. On the other hand, complex proprietary tools requiring onerous levels of training may make it difficult to both recruit and retain the best developers you can.

As we pointed out, speed is the name of the game with DevOps. Any delay could make or break a development project. The need to contact the support team of a proprietary tool can cause significant delays of hours or even days, which negates the impetus of DevOps completely.

However, open source tools are created by a community of developers who create publicly documented support resources that are easily navigated and voted on by the community for their accuracy.

Ultimately, it's about recognising what’s most important to your business and asking your IT teams whether proprietary software is driving any competitive advantage. In today's fast digital economy, the edge is generated through your ability to develop, deliver and refine the seamless apps and software your customers expect - not the name of the proprietary platform you happen to use.

If you’d like to see how you could be driving greater value from your technology infrastructure through Fujitsu’s Enterprise Postgres database platform, contact us at postgresql@fast.au.fujitsu.com or complete the enquiry form here.