In today’s IT world, the need for both the flexibility of Cloud and DevOps is in stark contrast with the increasing need for data security and consumer data protection.

It is no longer just banks and governments, but all companies who are required to protect their own data as well as their customers' in order to comply with privacy legislation such as the European Union’s GDPR. The need to protect their data is also caused by malicious hackers trying to piece together information so they can impersonate someone’s identity, for either financial gain or to hide their own identity.

While storage devices and file systems can provide a level of encryption for data stored on them, for databases the problem is much larger than a single installation. It must be easily applied no matter where the databases tables or logs are placed or copied, and in such a way that the data is secure and easily recovered in case of failure or disaster recovery scenarios.

PCI DSS-compliant 256-bit encryption, out of the box

Unlike other proprietary databases, you do not have to purchase additional products or modules to apply the highest level of security to your data. We provide Transparent Data Encryption free of charge, so your business complies with PCI DSS requirements.

Unlike PostgreSQL's pgcrypto module (more on this next week), the native TDE functionality does not require existing applications to be modified.

Leveraging Intel hardware encryption acceleration, the impact of encrypting and decrypting the data is minimised so that high performance applications can easily have their data secured with minimal overhead. 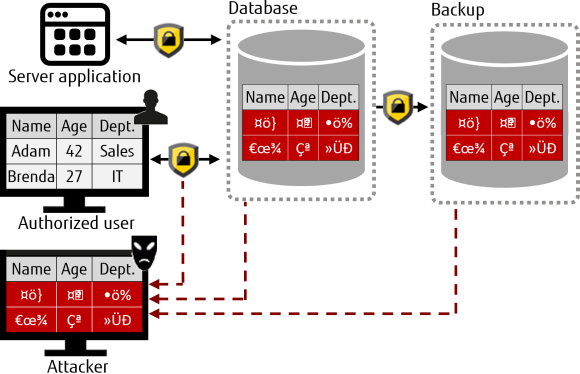 A vital extra layer of security

With FUJITSU Enterprise Postgres, data in the operating system files is encrypted by the TDE feature, so that valuable information is protected even if the file or disk is stolen. Data stored in the database is encrypted at write time, and decrypted during read. This is performed automatically by the instance, so neither the users nor the applications need to be concerned with key management or encryption/decryption.

What is the data scope for transparent data encryption?