< Back to blog home Fujitsu PostgreSQL Blog
Reuse your C and COBOL systems with little to no modification
Roy George | September 12, 2019

See how FUJITSU Enterprise Postgres can run C and COBOL legacy systems so you can have your data and a more agile system too. 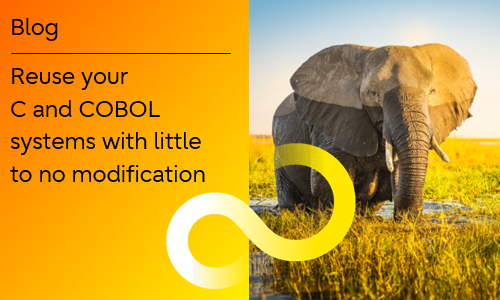 Many companies retain their legacy system data for a long time. All that data is often too large, too complicated, or too critical to risk being rewritten using a new language. FUJITSU Enterprise Postgres, on the other hand, gives you the best of both worlds by enabling you to reuse your C and COBOL data without the risk and expense generally associated with porting old code.

Let's start with what we mean by legacy systems

We refer to legacy systems as those that use pre-relational data models, and yes, there are still many of them around. So while companies focus mostly on updating their ICT systems with current technologies, the reality is they often still have legacy systems because they:

The data in a legacy system is also often required as an archive for occasional access or to comply with a specific legal requirement.

Much of this legacy data is in COBOL or C

It was 1969 and the world was changing in so many ways, including the introduction of some serious new programming languages, COBOL and C.

COBOL quickly became one of the first widely adopted high-level programming languages, and is still here 50 years later with many of the top retailers, banks, and insurers using their old Cobol-based legacy systems for core operations.

Like COBOL, C dates back to 1969 when Bell Labs created it (and yes it is based on another earlier language called B). C is generally considered the most popular programming language in history and is more closely related to machine language.

Both these legacy languages account for an enormous amount of sensitive data across the world - some of which would now be better migrated to a more contemporary database management system such as open-source based PostgreSQL. Doing so could benefit your organisation by:

However, porting a legacy application and database to a new platform can be quite complex, lengthy, and expensive. The effort involved depends on many factors, including the scale of the code required, separation of the data access layer from the user interface layer, use of legacy technologies, and availability of migration tools.

So how do you more easily and effectively retain your legacy data (for archive and legal reasons) and yet move it without incurring the potential business risk, time delays, cost blowouts, and lost data?

You do it with FUJITSU Enterprise Postgres

With FUJITSU Enterprise Postgres, all SQL commands can be executed from C and COBOL programs. Embedded SQL in C programs is precompiled by a library provided by the PostgreSQL community, and replaced with special functions calls using C language, so the result can be processed with any C compiler. Similarly, embedded SQL in COBOL programs is precompiled by ECOBPG, a library provided by Fujitsu, so that its output can be processed by any COBOL compiler.

You no longer need to suffer the downsides of legacy systems, nor use a middleware program. Your data ends up in a business-critical, secure, and high performance environment with all the support you need from one of the world's leading ICT vendors.

Contact our team if you have legacy systems and data that you would like to see migrated with ease. Our team can co-create your new environment by working with you to advise, plan, and deploy the process to ensure a safe and reliable transition. In the meantime, download the white paper below for more information.