The Fujitsu OSS team, in collaboration with other OSS community members, has been contributing code to enhance Logical Replication for PostgreSQL.

Much of what we have been doing in this area is not user-facing; it is necessary to give some background information so that our changes can be described in context.

SUBSCRIPTION replication is performed by two kinds of background workers:

The primary purpose of the Tablesync Worker is to initialize the replicated table by doing a COPY of all rows of the published table (at the time of the CREATE SUBSCRIPTION).

The Tablesync Workers and Apply Worker are each capable of receiving and handling pending replication protocol messages – e.g., messages for replicating the CRUD (Create, Read, Update, Delete) operations at the subscriber side. 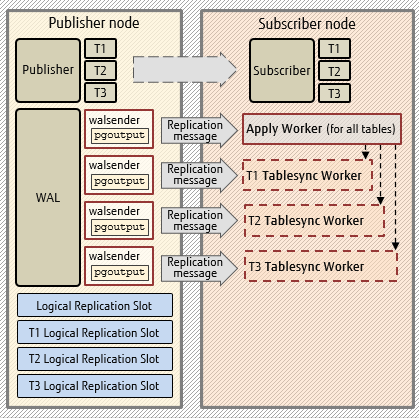 Usually, you won’t be quick enough to observe the Tablesync Worker processes before they have already completed, but in case you do, here is what the processes might look like for a subscription with multiple tables. (The walsenders are on the publisher node; the replication workers are on the subscriber node).

To avoid stepping on each other’s toes (double handling of the same message) the Apply Worker and Tablesync Worker negotiate with each other via states to synchronize themselves. 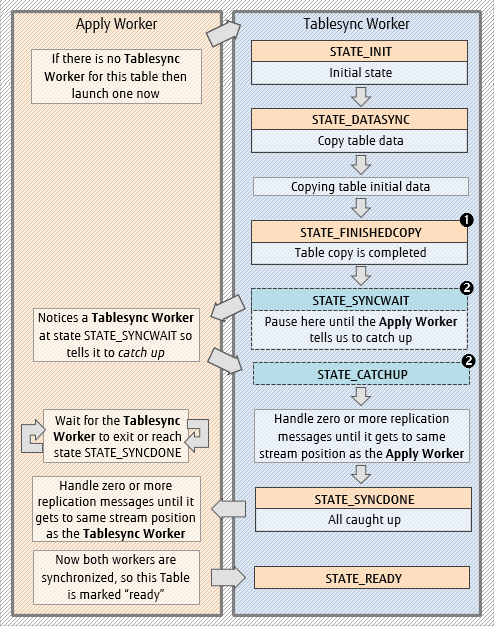 Notes for the diagram:

Here is a subscription with 5 tables. The states were captured at a point when 2 of the Tablesync Workers were still copying data.

The state codes are as follows: 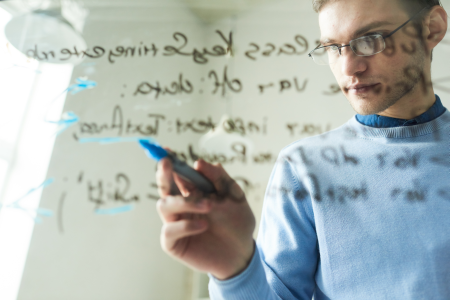 The Apply Worker is aware of all the subscribed tables which have not yet attained the STATE_READY, so after a moment the missing Tablesync Worker will be detected, and another one will be (optimistically) re-launched to replace it.

This error-launch-error-launch loop will keep happening until either:

The Fujitsu OSS team is working with the open-source community to enhance the Logical Replication for PostgreSQL. Some of the improvements we have contributed for the Tablesync Worker include the following:

Logical Replication Slots are the mechanism used by Postgres for keeping track of what master WAL files need to be retained for the SUBSCRIPTION’s WAL Senders. Each slot represents the stream of changes to be replayed in the order they were made on the origin server. Slots also hold information about the current position within that stream. 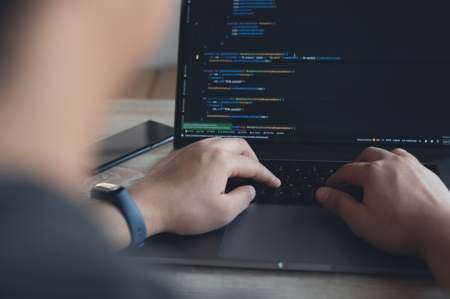 The Tablesync Worker has been modified to now use permanent slots instead of temporary slots. Replication origin information is persisted in the slots for keeping track of what data has already been replicated, so by using the permanent slots, it means that after a crash/restart it is now possible to pick up replication again from the most recently recorded checkpoint.

The following other enhancements are also possible now only because the Tablesync Worker is using permanent slots.

The initial data copy phase can be very expensive. For the default case (copy_data = true) the Tablesync Worker does COPY of all table data. This could be GB of data and may take a long time to complete.

This state is assigned when the copy phase has completed, and the table data is committed. Because the Tablesync’s Slot is now permanent, the origin information is also updated at this commit checkpoint.

Now, after this FINISHEDCOPY state is set, if any subsequent error happens causing the Tablesync Worker to be re-launched, the code logic knows that the (expensive) copy step has already completed – it does not repeat it because the replication re-starts from the last known origin.

Previously, Tablesync Workers ran entirely in a single transaction which either was committed or not depending if any error occurred.

The Tablesync Worker has been enhanced to support multiple transactions:

Combined with the new FINISHEDCOPY state this means the copy part can be independently committed. Also, because the replication origin tracking is recorded in the permanent slot, it means any already-committed data can be skipped.

Fujitsu has also contributed numerous other bugfixes and small improvements in the PostgreSQL Logical Replication area, and we regularly participate in reviews of other contributed patches.

Here are some more PostgreSQL 14 changes we have authored, with the help of others:

The improvements made to the Tablesync Worker help to make Logical Replication:

The Fujitsu OSS team is continuing to help make Logical Replication improvements, and we already have several enhancements in the pipeline which we hope to get committed in PostgreSQL 15.

Stay tuned for more blogs on this topic.