Businesses are changing dramatically with the evolution of digital technology, requiring systems to coordinate with various types of data sources and formats to create new value. PostgreSQL allows this via foreign data wrappers, which enable access to foreign data in various formats such as relational databases, NoSQL, and geospatial.

What are foreign data wrappers?

Foreign data wrappers (or FDW) are a type of PostgreSQL extension that provides access to foreign data using SQL statements such as SELECT and UPDATE.

FDWs can be created by using the library published by PostgreSQL and can be customized according to the format of the data to be linked with. Many companies, projects, and individuals have created FDWs in this way. There are nearly 120 types of FDWs available to the public, allowing to access a wide range of data sources.

The main categories of foreign data that can be accessed from PostgreSQL include:

The access point for foreign data is called a data source.

In addition to referencing foreign data, some FDWs benefit from a pushdown mechanism to run SQL to update, filter, or sort data in the data source. This section gives an overview of the mechanism and usage of FDW.

This section describes how FDWs connect to foreign data sources, and its mechanism in PostgreSQL.

To access a foreign data source, install the corresponding FDW as a PostgreSQL extension and define the foreign data as a foreign table. Foreign data will then be accessible through the FDW via SQL statements. 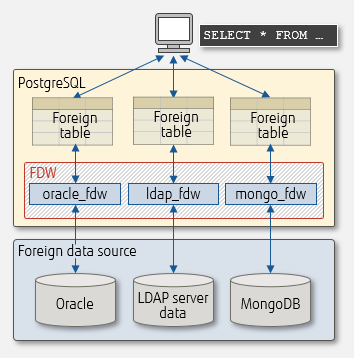 When a client issues an SQL statement that includes a foreign table, the process is run within PostgreSQL according to the following workflow. 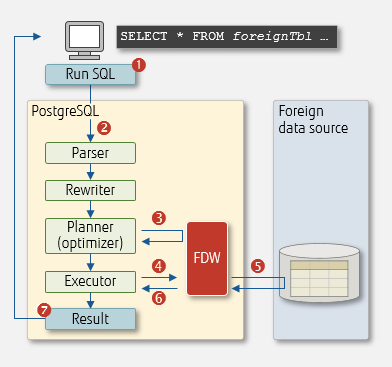 Before using a FDW, you will need to create related objects - this involves the following:

The following is an example of using the FDW postgres_fdw to link with an external PostgreSQL system. For postgres_fdw, you will need to create the objects in the order shown below on the local side.

Linking to an external PostgreSQL system

The items and formats that can be specified in OPTIONS of CREATE SERVER, CREATE USER MAPPING, and CREATE FOREIGN TABLE vary depending on the FDW used.

In addition to CREATE FOREIGN TABLE, you can also use IMPORT FOREIGN SCHEMA to create foreign tables using the same column definition as the remote table.

This is useful if you want to create multiple foreign tables in the same schema, as foreign tables will be created locally on a per-schema basis according to the remote side.

Our article "How to link to Oracle databases using oracle_fdw" expands on this.

FDW has a mechanism called pushdown, which allows the remote execution of clauses in client SQL statements, such as WHERE and ORDER BY. For example, pushdown of WHERE has the effect of reducing communication bottlenecks, because the target data is filtered on the remote side and thus reduces the amount of data transferred between local and remote systems. In a process where 5 out of 1,000 rows of foreign data are extracted by specifying the WHERE clause, the data transfer volume is reduced by 99.5%.

Clauses available for pushdown differ depending on the FDW. Also, some combination of clauses may not be eligible for pushdown. Be sure to verify the specifications by referring to the documentation of the FDW being used.

The points below refer mainly to postgres_fdw, and may differ for other FDWs – if you plan to use a different FDW, please check its documentation accordingly.

These are the points to keep in mind when using update transactions on foreign tables.

FDWs automatically convert data when transferring between the foreign table and its remote counterpart, but in some cases the conversion may not take place correctly if the remote data source is other than PostgreSQL.

For example, in VARCHAR(n), Oracle treats 'n' as the number of bytes, while PostgreSQL treats it as the number of characters. This may cause an error if the capacity is exceeded when data is converted.

By combining FDW with table partitioning, foreign data distributed and stored on multiple servers can be aggregated into a partitioned table via foreign tables (partitions). For example, sales information in branches can be aggregated to a partition table on a server at the head office, where data can be efficiently referenced and analyzed. 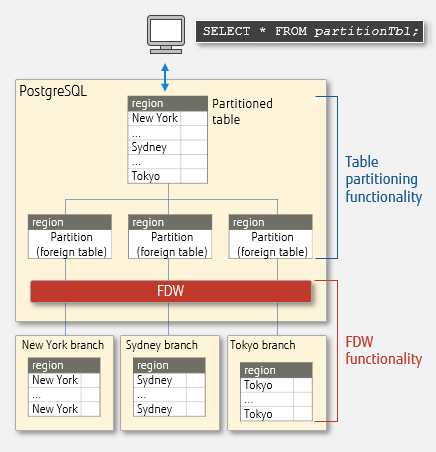 The URLS below lists FDWs available for PostgreSQL: 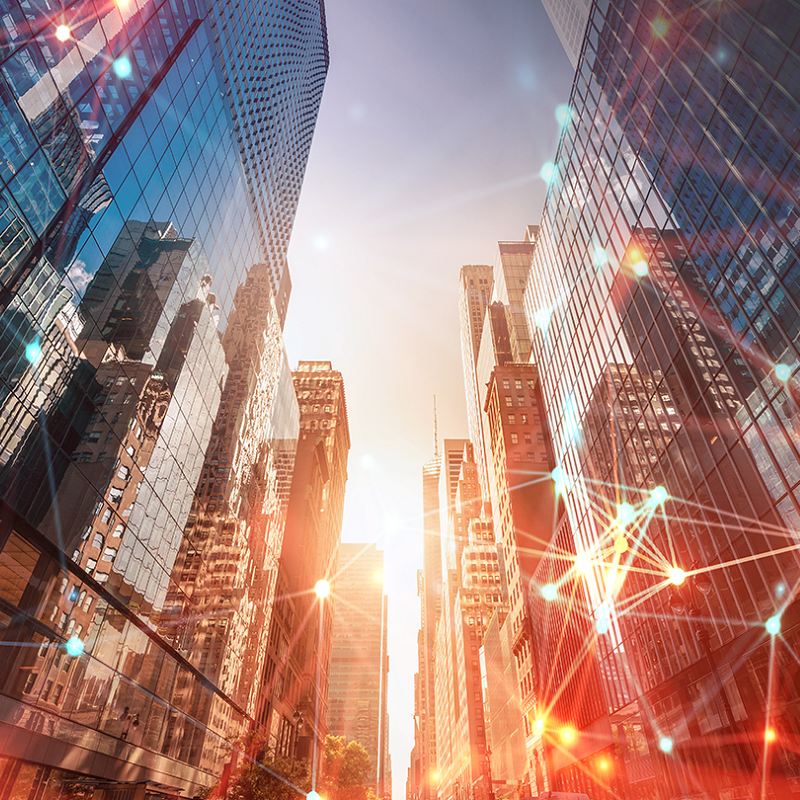 How to link to Oracle databases using oracle_fdw (part 2)
This article concludes our discussion of the use of PostgreSQL's foreign data wrapper oracle_fdw, and how to use it more effectively. 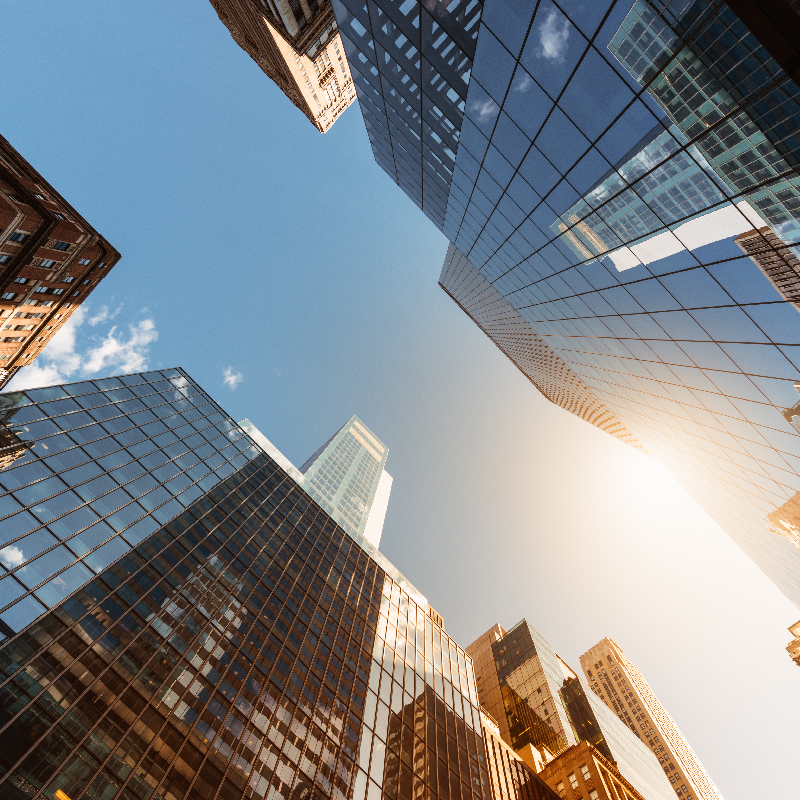 What are the partitioning types available in PostgreSQL, and how should I choose one?
Explaining partitioning, the method for storing data in divided tables, based on declarative partitioning. 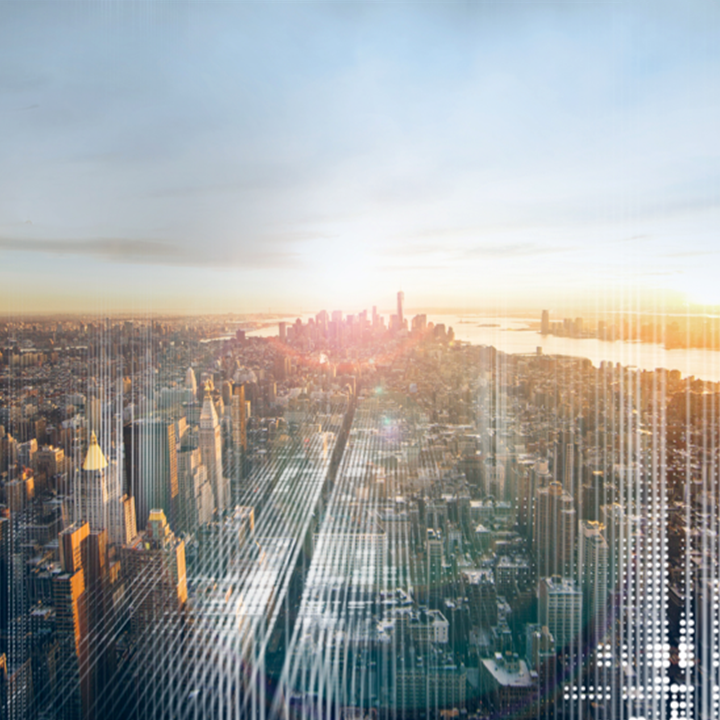